Facts about meth: What is methamphetamine? 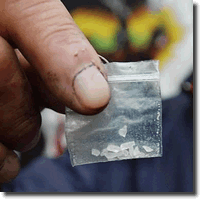 A drug with immense abuse potential, methamphetamine (known on the street as "speed," "meth," "crank," "crystal-meth," and "glass") is a central nervous system stimulant of the amphetamine family. Like cocaine, it is a powerful "upper" that produces alertness and elation, along with a variety of adverse reactions. The effects of methamphetamine, however, are much longer lasting than the effects of cocaine, yet the cost is much the same. For that reason, methamphetamine is sometimes called the "poor man’s cocaine."

Facts about meth: What is the history of meth?

Developed by a Japanese chemist in 1919, methamphetamine was used during World War II to help soldiers stay alert and to energize factory workers. Although it is prescribed with great caution today, it is legally available in the United States for the treatment of attention deficit disorder and obesity.

Facts about meth: How is it taken?

Methamphetamine can be swallowed, smoked, snorted, or injected. Sold as a powder, it can be mixed with water for injection or sprinkled on tobacco or marijuana and smoked. Chunks of clear, high-purity methamphetamine ("ice," "crystal," "glass"), which resemble rock candy, are smoked in a small pipe, much as "crack" cocaine is smoked. Some users exploit the rapid vaporization of methamphetamine, spreading the powdered drug on aluminum foil, heating the foil, and inhaling the fumes that are released. Others "speedball" by combining methamphetamine and heroin.

Meth tends to be taken differently in different locales and by different age groups. In San Francisco, for example, injection is the preferred route; in Honolulu, it’s smoking. In Phoenix, younger users choose pills, while older users snort. Snorting the drug, however, irritates the nose, and smoking is hard on the throat and lungs. But it is smoking, along with injection that are the fastest ways to deliver the drug to the brain. By either route of administration, users get very high very rapidly and want to recapture the feeling as soon as it begins to fade.

Facts about meth: How does it affect you?

At lower doses, methamphetamine makes the user feel energetic, alert, self-confident—even powerful. With continued use these pleasurable feelings typically diminish, and most users report the need for increasingly higher doses to achieve euphoria. Under the influence of the drug, users often become agitated and feel "wired."  Their behavior becomes unpredictable. They may be friendly and calm one moment, angry and terrified the next. Some feel compelled to repeat meaningless tasks, such as taking apart and reassembling bits of machinery. Others may pick at imaginary bugs on their skin.

After a number of days on methamphetamine, during which time they barely sleep or eat, users become too tired to continue or have no meth left and begin to "crash." Initially, the crash is marked by agitated depression, sometimes accompanied by an urge for more methamphetamine. But these feelings soon give way to lethargy, followed by a long deep sleep. The depression returns, however, once the user awakens, and may last for days—a time when the potential for suicide is high.

With prolonged high-dose use or long binges, stimulant psychosis may develop. The psychotic user may feel intensely paranoid, hear voices, and experience bizarre delusions, believing, for example, that other people are talking about him or following him. Methamphetamine-induced panic and psychosis can be extremely dangerous and may result in incidents of extreme violence.

It is not unusual for psychosis to persist for days after the last dose of methamphetamine. Indeed, there are many reports of users remaining paranoid, delusional, apathetic, and socially withdrawn for weeks. Occasionally, methamphetamine-related psychosis lasts for years. But, in these cases, experts believe the drug has probably triggered symptoms of a pre-existing mental disorder.

Facts about meth: What are the dangers and consequences of meth use?