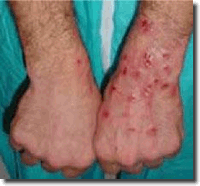 One of the many side effects of meth addiction is meth sores, otherwise known as speed bumps or crank bugs. Medically, this is known as formication.

Heavy meth use causes a rise in body temperature and increased blood flow to the skin to counteract it. The produced sweat contains an enzyme that increases blood flow to the skin even more. When the sweat evaporates, it removes the protective sebaceous oil which coats the skin. The combined effects of dehydration, sweating and removal of the sebaceous oil on the skin create a sensation on the nerve endings on the skin and cause the addict feelings of something irritating or "crawling" on or under (Delusional Parasitosis) the skin. Also to be mentioned here is that the skin is an escape route for the toxic wastes used to create the drug.

The psychological aspects of this drug complicate the situation even more by causing the user to tweak out and obsessively pick, scrape and dig at their skin. This action, is generally performed with the fingernails (staph havens) but can also be performed with any number of chosen "tools" which could be any object found in an ordinary home that could be used for picking or scraping.

The results are penetration and removal of the dermis, causing open, red (often bleeding) sores, most commonly on the face and arms but can be anywhere on the body. This provides a potential breeding ground for staph infection. In the presence of staph infection, the sores become enflamed, swollen and puss filled, requiring topical/systemic antiB's. If left untreated, pathogens can enter the blood stream causing dangerous sepsis or deeper abscess requiring heavy duty, IV anti-B's and/or surgical drainage.

Old scars from formication are often permanent and look rather like those produced following a severe case of chicken pox. The degree to which new sores present themselves is proportionate to the length of time spent performing the action of formication following most recent use.