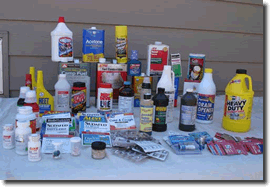 Specific meth ingredients vary with each meth cook but there are some that are generally the same for most. Many of the chemicals can be found in common household items such as lantern fuel, cleaners, acetone, muriatic acid, and diet pills. The processing required to make methamphetamine from precursor substances is easier and more accessible than ever. There are literally thousands of recipes and information about making meth on the Internet. An investment of a few hundred dollars in over-the-counter medications and chemicals can produce thousands of dollars worth of methamphetamine. The drug can be made in a makeshift "lab" that can fit into a suit case. The average meth "cook" annually teaches ten other people how to make the drug.

As mentioned above, household products contain most of the necessary meth ingredients to complete the manufacturing process. Certain brands of drain cleaner, for instance, have a high concentration of sulfuric acid. When mixed with table or rock salt, hydrogen chloride gas is produced for use in the final stage of methamphetamine production. The hydrogen chloride gas procedure as well as other procedures are extremely dangerous and can cause death or serious injury not only to the individuals making the methamphetamine, but to others who may be living in an adjoining house or apartment.

Meth ingredients are toxic, and the lab operators routinely dump waste into streams, rivers, fields, and sewage systems. The chemical vapors produced during cooking permeate the walls and carpets of houses and buildings, making them uninhabitable. Cleaning up these sites requires specialized training and costs an average of $2,000-$4,000 per site in funds that come out of the already-strained budgets of state and local police.

There are many different methods for producing methamphetamine. Each method has its own inherent dangers. Many of the chemicals used are caustic or corrosive, and some of the processes create noxious and harmful fumes. One variation is called the "Nazi method" because it supposedly mirrors a meth-making procedure followed by the Germans during World War II. Instead of hydriodic acid as one of the meth ingredients, the Nazi method uses anhydrous ammonia, a chemical found in fertilizer and often stored in large tanks on farms. Meth makers sometimes are known to steal the product in the middle of the night and briefly set up shop near the tank. Anhydrous ammonia can produce a poisonous gas if its liquid form is released into the air. Another method is more earthy. In some areas, so much meth by-product has been dumped into the soil that cooks are excavating hundreds of cubic yards of earth from the sites to process the dirt and extract the chemicals to make meth.

Ever wonder why so many people find crystal meth so addictive? After reading about the list of meth ingredients, you may find the phenomenon even more puzzling: