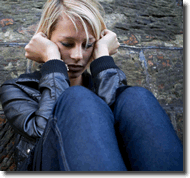 Meth withdrawal symptoms vary from person to person. Methamphetamine is a stimulant drug chemically related to amphetamine but with stronger effects on the user’s central nervous system. The common street terms for the drug include "speed," "meth," "crystal," and "crank." This drug is taken in pill or powdered form by snorting or injecting the drug. Crystallized methamphetamine known as "ice," "crystal," or "glass," is a smokable and more powerful form of the drug.

Meth addiction has three patterns: low intensity, binge, and high intensity. Low-intensity addiction describes an user who does not have a psychological addiction to the meth but uses the drug on a casual basis. Binge abusers use a great deal of meth over a short period of time compared to high intensity users who abuse the drug at a constant rate for an extended time period. Both binge and high-intensity abusers have a psychological addiction to the drug and prefer to smoke or inject meth to achieve a faster and stronger high.

Meth withdrawal symptoms include but are not limited to:

A new study suggests meth withdrawal is associated with brain changes similar to those seen in depression and anxiety. Results of a new study indicate that people who have recently stopped abusing the powerfully addictive drug methamphetamine may have brain abnormalities similar to those seen in people with mood disorders. The findings suggest practitioners could improve success rates for methamphetamine users receiving addiction treatment by also providing therapy for depression and anxiety in appropriate individuals.

“Methamphetamine abuse is a grave problem that can lead to serious health conditions including brain damage, memory loss, psychotic-like behavior, heart damage, hepatitis, and HIV transmission,” says Dr. Nora D. Volkow, director of the National Institute on Drug Abuse (NIDA), National Institutes of Health, which funded the study. “Currently, no medication exists to treat abuse or addiction to amphetamines or amphetamine-like compounds; however, drug counselors and other health professionals have successfully used behavioral interventions to treat addiction. Treatment outcomes may improve if associated mental conditions are addressed concurrently with addiction.”

Dr. Edythe London and her colleagues at the University of California Los Angeles, the University of California Irvine, and NIDA’s Intramural Research Program used positron emission tomography — PET, a technology to image brain activity — to compare glucose metabolism in the brains of 17 methamphetamine abusers who had stopped using the drug 4–7 days before their participation in the study, and 18 nonabusers. Those going through meth withdrawal averaged a 10-year history of drug abuse that included consuming an average of 4 grams of methamphetamine per week. They said they had used the drug at least 18 of the preceding 30 days.

All participants responded to questions about their drug use, and underwent a PET scan to measure how their brains used glucose while they performed an attention task. On the day of the scan, participants rated their symptoms of depression and anxiety. The drug abusers who were going through meth withdrawal also rated their cravings for the drug within 48 hours of the scan. The scientists found that methamphetamine abusers reported higher ratings of depression and anxiety than nonabusers.

“Improving our awareness of substance abuse as a condition that does not exist in isolation will contribute to more effective prevention and treatment interventions,” says Dr. Volkow.