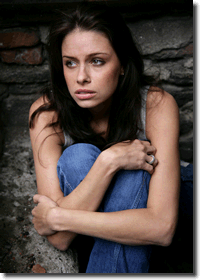 What causes meth addiction? All addictive drugs have two things in common: they produce an initial pleasurable effect, followed by a rebound unpleasant effect. Methamphetamine, through its stimulant effects, produces a positive feeling, but later leaves a person feeling depressed. This is because it suppresses the normal production of dopamine, creating a chemical imbalance. The user physically demands more of the drug to return to normal.   This pleasure/tension cycle leads to loss of control over the drug and addiction.

Meth addiction short-circuits a person's survival system by artificially stimulating the reward center, or pleasure areas in the brain. This leads to increased confidence in meth and less confidence in the normal rewards of life. This happens on a physical level at first, then it affects the user psychologically. The result is decreased interest in other aspects of life while reliance and interest in meth increases. In one study, laboratory animals pressed levers to release methamphetamine into their blood stream rather than eat, mate, or satisfy other natural drives. The animals died of starvation while giving themselves methamphetamine even though food was available.

Beyond the social damage meth addiction causes, there are well known physiological effects that may take a year or more to heal. This includes changes in the dopamine pathways in the brain that alter how an addict is able to feel pleasure. Without the drug to stimulate these damaged areas of the brain, addicts will be unable to feel normal pleasures and subsequently fall into depression.

Meth addiction leads to withdrawal when users choose to stop taking the drug. The severity and length of symptoms vary with the amount of damage done to the normal reward system through methamphetamine use. The most common symptoms are: drug craving, extreme irritability, loss of energy, depression, fearfulness, excessive drowsiness or difficulty in sleeping, shaking, nausea, palpitations, sweating, hyperventilation, and increased appetite.

Is recovery from meth addiction possible? Yes! However, several treatment providers describe methamphetamine abusers as "the hardest to treat" of all drug users. They are often overly excitable and "extremely resistant to any form of intervention once the acute effects of meth use have gone away." Meth addicts get over the acute effects of withdrawal fairly quickly.

However, the "wall" period lasts 6-8 months for casual users and 2-3 years for regular users. This is a period of prolonged abstinence during which the brain recovers from the changes resulting from meth use. During this period, recovering addicts feel depressed, fuzzyheaded, and think life isn't as pleasurable without the drug. Because prolonged use causes changes in the brain, willpower alone will not cure meth addicts. Is meth addiction relapse common? Because there are psychiatric, social, and biological components to meth addiction, there is a high likelihood of relapse. Key relapse issues are similar to that of cocaine use and include other substance abuse and being around drug-using friends.