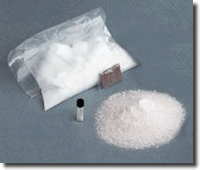 What is meth? Methamphetamines are synthetic stimulants that are produced and sold illegally in pill form, capsules, powder, and chunks. It is a white, odorless, bitter tasting crystalline powder that can be easily dissolved in water or alcohol. It can be mixed with water for injection or sprinkled on tobacco or marijuana and smoked.  Since methamphetamine will vaporize rapidly, some heat the drug and inhale the fumes that are released. 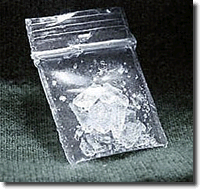 Methamphetamines may be known as meth, crank, glass, speed, crystal, ice, batu, chalk, shabu, or zip. "Ice" is a large crystal form of high-purity methamphetamine hydrochloride. Ice derives its name from its appearance: large, clear crystals that resemble chunks of ice, shards of broken glass, or rock candy. Crank refers to any form of methamphetamine. Ice is a crystallized smokeable chunk form of methamphetamine that produces a more intense reaction than cocaine or speed. Ice has an appearance that is clear and crystal-like, and resembles frozen ice water. Crank and ice are extremely addictive and produce a severe craving for the drug.

Sometimes called the "poor man's cocaine", methamphetamine is a central nervous system stimulant of the amphetamine family.  What is meth like for those who abuse it? Methamphetamines stimulate the central nervous system, and the effects may last anywhere from 8 to 24 hours. Like cocaine, it is a powerful "upper" that produces alertness and elation, along with a variety of adverse reactions. After the effects of methamphetamine wears off, it can cause severe withdrawal that is more intense and longer lasting than both speed and cocaine. After the initial "rush," there is typically a state of high agitation that in some individuals can lead to violent behavior.

What is meth distribution?

It was not until 1988 that ice became widespread in Hawaii. By 1990, ice spread to the U.S. mainland, although distribution remained limited to retail amounts in just a few regions of the country. In the early 1990s, Koreans served as the principal supply source for ice that was smuggled from Asia directly to Hawaii and the U.S. mainland. Intelligence data indicates that traffickers from Mexico are supplying Asian organizations/gangs on the West Coast and in Hawaii with methamphetamine for conversion to ice.

What is meth addiction?

It may be surprising to some that methamphetamine was once a legitimate drug. In fact, it is still prescribed and sold in the U.S. (under the trade name Desoxyn) for weight loss and attention deficit disorder. This is an oral form of the drug. The injectable or smoked form is much more powerful and is illegal. Inhaling or injecting meth gives the addict an almost instant high. The drug speeds quickly into the bloodstream and the brain. While methamphetamine is addictive in any form, it is the immediate rush and sustained high of the inhaled drug that makes it so addictive.

Methamphetamine, when inhaled, gives the user an extreme, overwhelming sense of euphoria, power, and seemingly boundless energy. Ideas come in a flash, conversation quickens, and sexual arousal is heightened; lights and colors seem brighter, the heart beat speeds up and the person becomes restless with nervous intensity. It is sometimes used to instill confidence in social situations and an oral tablet, Yaba (a mix of caffeine and meth) has become popular at clubs and raves.

This wonderful feeling quickly fades and the user crashes. The crash comes from the user’s body paying the price for the super-charged meth state. Fatigue and depression are the common elements. Users may sleep for extended periods unless they have become dependent on the drug, in which case they will awaken and begin a cycle of craving and drug seeking behavior.

What is meth tweaking?

Extended periods of use, called ‘tweaking’, will force an addict to keep using more and more of the drug. They will stay awake and tweaked for days or even a week at a time. An episode may only end when they are arrested or hospitalized for psychotic, violent behavior or when their body simply cannot function any longer.